Asylum Enforcement Is Down

New figures (summarised here) and the graph below show that the number of asylum cases waiting for over a year to be processed has risen to nearly 26,000 or just under 52,000 claims that are awaiting an initial decision. Yet more evidence that the UK’s asylum system is unfit for purpose. 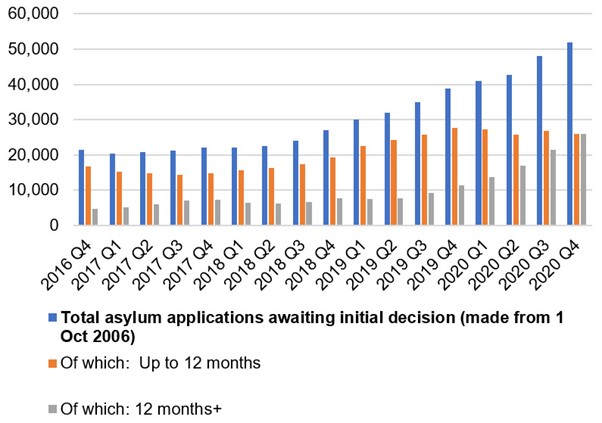 Read our paper on the creek our paddleless government is in.

As we have long argued, (e.g. see here) without a firm policy to return failed asylum seekers, and not accept asylum applications from those coming from safe countries, numbers will continue to rise. Consistent and firm enforcement, supported by our courts, is the only way to end the abuse asylum abuse and stop illegal Channel crossings.

Here is a roundup of the week’s events at Migration Watch UK.

Lax enforcement is the subject of a blog we posted this week (and mentioned above) on the shockingly low numbers of removals that have been made as illegal immigration skyrocketed across the Channel throughout 2020 and the lockdowns. The pandemic may have resulted in fewer flights, but what is also clear is that last year’s poor record was part of a long-term trend, as we note in the blog. Hurrah for the new rules that will mean rejecting asylum claims from those picked up at sea who are looking to enter the UK or who have made their way through another safe country. Yet it remains to be seen whether they will actually help tackle this growing problem.

Migration Watch in the media

Our Chairman Alp Mehmet was quoted in The Times this week:

‘This is hardly the ideal time to take the cutter out for repairs, frankly. All it does is show the government is only half-hearted. Instead of increasing resources they appear to be denying them to the Border Force. How can they expect them to do their duty and do their work without the resources they need?’

Alp has also reacted to some of the top stories about immigration in the media this week.

‘The idea that the condition of former army barracks amounts to a violation of human rights will leave most people puzzled. What was good enough for members of the armed forces is surely perfectly adequate for those entering the country (many of them illegally) to claim asylum.’

The Times: UK fails in most attempts to remove asylum seekers

‘The pandemic has of course played a part in the failure to remove unsuccessful asylum applicants. But let’s not overlook the growing failure to enforce the law. Our asylum system deals with genuine asylum seekers generously and humanely, as it should. But turning a blind eye to those who abuse it simply encourages more abuse and emboldens people-traffickers.’

The Daily Mail: Former skipper who piloted small boat packed with migrants across the English Channel becomes tenth person to be jailed for assisting unlawful immigration this year

‘It is right that the law deals firmly with people traffickers, who care nothing for the people whose lives they endanger. However, this despicable trade continues because in the vast majority of cases it succeeds in getting migrants to the UK. For so long as this is allowed to happen, cross-Channel illegal immigration will continue, and very likely increase.’

The Daily Mail: Denmark becomes the first European nation to tell Syrian refugees they must return home, saying the country is now safe

‘A dose of realism from Denmark from which we can learn.’

It was good to learn from recipients of last week’s email who had written to their MP about the new weakened immigration system. Some received replies, others said they had not. Thank you for adding your voice to our (and your) calls on the government to think again about the new ‘points-based’ system.

These new reforms which were billed as delivering ‘firmer’ control have resulted in the scrapping of the cap on work permits (see paper), a reduction in skills and education thresholds for work visas and no requirement for UK workers to be offered the chance to apply for jobs first (see brief).

Following Brexit, we were told there would be more opportunities for ordinary British jobseekers. Instead, it is only opportunities for overseas applicants in 80% of the world’s countries that have grown. Employers have been given access to a worldwide pool of more than 600 million people (see our paper).

In a time of major economic uncertainty this is an insult to our jobseekers and graduates.

If you would like to add your voice to the call on the government to put the interests of British workers first, you can write to your MP by clicking here.