Comparison of UK Benefits with those of the EU14

1. In-work benefits for the low paid are generous in the UK compared to other countries in the EU15 and may act as a much stronger pull factor towards Britain than to other member states. This paper finds that the UK is the fourth most generous country of the EU15[1] in its provision of benefits to low income workers after Denmark, Luxembourg and Ireland – with populations of 5.5 million, 500,000 and 4.5 million respectively. Furthermore, the UK is more generous than Finland and France and much more generous than Germany, Sweden the Netherlands and the rest of the EU14 in topping up low wages. When the costs of living are accounted for, low paid workers in the UK are the second richest in the EU15 after Luxembourg. Access to unemployment benefit, while paid at a lower rate than in many of the EU15 countries, is much easier to access in the UK where there are virtually no conditions of access, compared to more robust controls elsewhere.

2. Two scenarios will be examined. The first is a family made up of a worker, a spouse and two children where one adult is in work earning 50 percent of the average wage and the other adult is not working and not drawing unemployment benefits. The second scenario is a similar family where the sole earner is now unemployed.

Welfare Provision in the United Kingdom

3. Low income earners in the UK have their income topped up by a range of in-work benefits and other benefit payments designed to help low income families with the costs of housing and maintaining a family. In scenario one, an individual earning 50 percent of the average wage – a relatively low wage – will have a gross pay of £17,150. After a deduction of £2,135 in income tax and £1,258 in National Insurance (NI), this family is left with £13,755[2]. The family will then receive £3,952 in housing benefit, £6,897 in family related benefits as well as £416 of in-work benefit. The total net take home income is therefore £25,022[3]. That is an 82 percent increase on the post-tax pay.

4. In scenario two where the sole breadwinner is now unemployed, the family would be wholly reliant on the benefits system for income. They would receive £5,343 in unemployment benefit which is not particularly generous compared to some EU countries. However, they also receive a number of other benefits - £7,639 in housing benefit and £6,897 in family related benefits. Their total income in this scenario would be £19,880, which is 79% of the total household income when the sole earner was in work.

Welfare Provision in the UK compared to the EU14

5. It is possible to calculate the tax deducted and benefit provided in these two scenarios in the rest of the EU15. The EU 15 has been selected for comparison, on the basis that citizens of the A8 and A2 countries are likely to be the ones migrating towards the wealthier west. Cyprus and Malta are excluded from this study.

6. In scenario one, only in three other countries would there be a greater difference between the income after tax and the final household income inclusive of benefits – in Denmark, Luxembourg and Ireland. In Denmark the final household income is 286% higher than the post-tax income, in Luxembourg that figure is 92% higher, while in Ireland it is 85% higher. The UK is thus the fourth most generous state for low earners - see Annex A for a full table of results. (In the UK the uplift for even lower paid workers is much higher; on the current minimum wage of £6.19, an individual with a spouse and two children would have a final take home pay 182 percent higher than his or her post-tax earnings)[4].

Figure 1. The difference between income after tax and final household income, i.e. inclusive of benefits , based on earnings that are 50 percent of the average wage in each country. Source: OECD 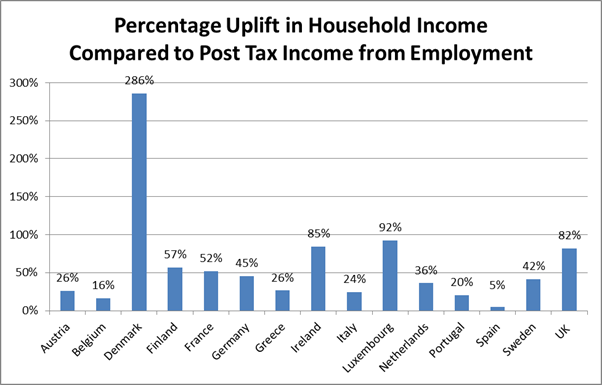 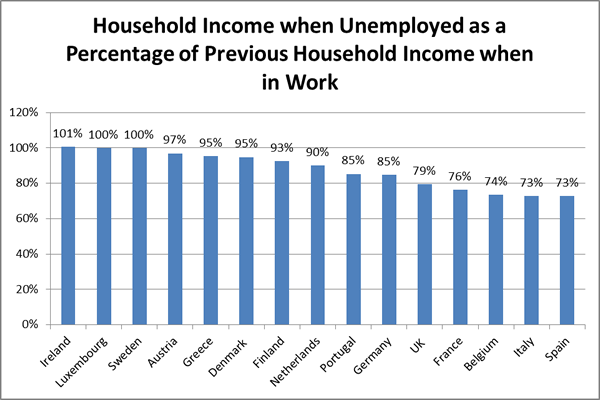 Value of Welfare Provision across the EU15

8. Raw numbers only provide part of the picture since the cost of living varies widely between countries. There is, however, a means of accounting for the different costs of living by using Purchasing Price Parity data which is expressed in US Dollars. Income can be converted into US Dollars and then directly compared.

9. The results show that, when the costs of living are accounted for, workers in the UK who are on 50 percent of the average wage and who have their income topped up through in-work benefits are the second richest in Europe, after Luxembourg. On this basis their pay would be equivalent to $36,000 pa compared to $39,000 in Luxembourg and $34,400 in Denmark. Ireland comes in at $31,200, Germany at just under $31,000, Netherlands at just under $29,000, Finland at $25,100, and France at $24,000. Individuals are worst off comparatively speaking in Greece and Portugal where pay is worth the equivalent of $15,200 and $14,100 respectively (See Annex C for the full data)

Figure 3. Total Household Income of Individual in Scenario 1 (Individual with Spouse and Two Children Earning 50 percent of the Average Wage), in Euros, and in US Dollars, accounting for Costs of Living (using PPP Data). 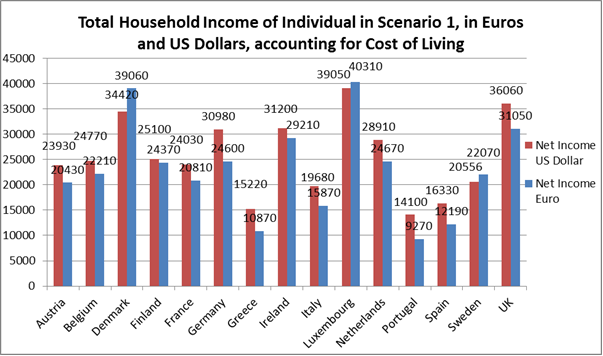 Ease of Access to Unemployment Benefit in the EU15

11. For example in every other EU15 country an individual can only claim unemployment benefit when they have worked for a specific amount of time and thus contributed to the system or made a certain number of social security payments. This ranges from 4 months in France to one year in many countries, including Austria, Denmark, Germany, Italy, and Spain. In Portugal an individual has to have worked for at least 450 days in the previous 24 months. All other countries require a certain number of payments or that a certain number of days/weeks/months be worked before an individual qualifies for unemployment benefit. The level of benefit paid is generally linked to previous earnings and often capped at an upper limit – only in Ireland and Finland is unemployment benefit paid at a flat rate. Moreover, in all countries except Belgium, unemployment benefit is paid for a period of time related to the amount of time previously spent in employment or it is capped for a period ranging from a few months to a maximum of 38 months in the Netherlands; it is capped at two years in Denmark, France, Portugal and Spain. In Belgium it can be claimed for an indeterminate period of time.

12. This contrasts sharply with the UK where there are two types of unemployment benefit available to job seekers. Contribution-based Job Seekers Allowance (JSA) is conditional, at least in theory, on actively seeking work, and Jobcentre staff regularly monitor claimants to see what they are doing to find work, with sanctions being applied if they do not. Contribution-based JSA is based on NI contributions and capped at six months. However, if you do not qualify for contribution-based JSA as you have not previously worked then you are able to claim income-based JSA – also conditional on actively seeking work – but not conditional on previous NI contributions, therefore payable to someone even if they have never worked. There is no time limit on income-based JSA and it is paid at a rate unrelated to previous earnings.[5] (See Annex D). These two benefits (Income and Contributions-based JSA) are paid at the same rate therefore a worker is not penalised for never having contributed anything in tax or NI.

13. EU rules permit social security contributions made in one country to be ‘transferred’ when claiming unemployment benefit in another country. However, since the UK has no minimum contribution requirement for income-based JSA, and the payment is related neither to previous earnings nor to the length of time that has been worked, an unemployed worker would be able to claim unemployment benefit on much more favourable terms than in the rest of the EU15 where the benefit is more strictly governed.

14. In short, it is far easier to gain access to unemployment benefits in the UK than anywhere else in the EU15.

15. The UK is far more generous than most other EU15 countries in topping-up low wages by just over 80% through in-work and housing benefits. This makes employment in the UK a very attractive for migrants from less wealthy EU member states, especially after adjusting for differences in the cost of living.

16. Access to unemployment benefit is also much easier than in other EU countries. 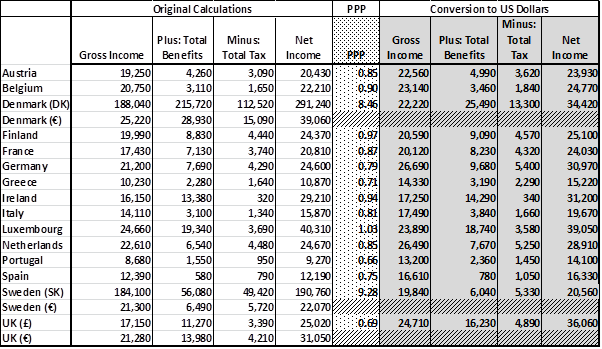 Information on conditions of receipt of unemployment benefit taken from European Commission documents, ‘Your Social Security Rights in …’ produced in 2011 and which can be found here, URL: http://ec.europa.eu/social/main.jsp?langId=en&catId=858.

OECD Data is from 2010 and is the latest available.