1 Claims that immigration is needed to support the provision of pensions and care for the elderly are deeply misleading. As immigrants tend to be young, their arrival does reduce the average age of the population. But to maintain any substantial and enduring effect on the age-structure requires a constant increase in the number of immigrants, leading to a huge growth in population. The reason is that immigrants themselves age and then require still more immigrants to compensate for the larger number of older people. Keeping the Potential Support Ratio (PSR) to present levels would require a growing but variable number of immigrants peaking at 1.2 million per year before 2051 and up to 5 million per year later in the century. That would increase UK population to 119 million by 2051 and 303 million by the end of the century and so on to the stratosphere. A wide range of expert studies has come to a similar conclusion.

2 Population ageing is an unavoidable characteristic of advanced societies. All developed countries face the same problem to a greater or lesser degree. The ageing of populations is an inevitable consequence of the control of fertility, leading to low birth rates, and very welcome declines in mortality. The proportion of young people accordingly falls, and more survive to old age.

3 The result is inevitably a reduced ratio of people of potential working age to people of pensionable age. For international comparison, these limits are conventionally taken to be 15-64 for working age and 65 and over for pensionable age. The number of people of working age for each person of pensionable age is called the ‘Potential Support Ratio’ or PSR. At the moment in European countries it stands at about 4. By mid century it will decline to between 1.5 and 2.5, depending primarily on the birth rate. Countries with relatively high birth rates such as the UK, France and the Scandinavian countries can expect lower levels of population ageing than Germany and the Mediterranean countries, which have much lower birth rates.

4 It is important to remember that these are only demographic ratios. They pay no attention to the proportion of people of working age who do not work, nor the number of pensionable age who are still working. These differ greatly between countries and change over time. Increases in workforce participation, and the extension of working life in response to longer actual life, can go a long way to compensate for demographic ageing.

5 The following graph shows the outlook for the United Kingdom according to the latest, 2008 based, projections from the Office of National Statistics. With no immigration the PSR would drop from today’s level of 4.15 to 1.86 in 2051. The Principal Projection assumes net immigration of 180,000 per year. That would mean a smaller drop in the PSR to 2.43 in 2051. However, the population would be 77.1 as opposed to 63.4 million so the improved PSR would be at the cost of an extra 13.6 million people. The graph also shows that high migration of 240,000 a year only postpones the drop in the PSR for a number of years; the increase in population would, however, be even greater. 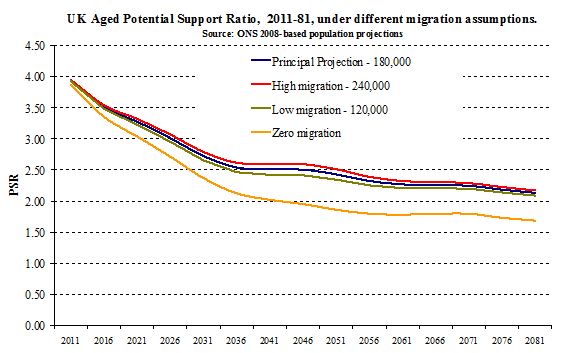 6 The birth rate in the UK has been rising since 2001. It reached 1.9 in 2007 and increased again by 2008 to 1.96. The latest ONS projections assume that it will revert to 1.84 in the long run. But it is instructive to see what would happen were it to remain at 1.96. With the same improvements in survival, the support ratio would fall to 1.96 by 2051 with zero migration, and with 180,000 net immigration it would be 2.45 Population totals in 2051 would be 65.2 million and 80.2 million respectively. The graph below shows the effect of higher fertility, rising from the current assumption of 1.84 to 1.96, and also reverting to 1.75, the average during most of the 1980s and 1990s. The effect of higher fertility is not great. No imaginable increase in the birth rate can ‘solve’ population ageing. But higher fertility is clearly beneficial for the support ratio. In the absence of migration, even replacement-level fertility (2.05) would not lead to population growth. 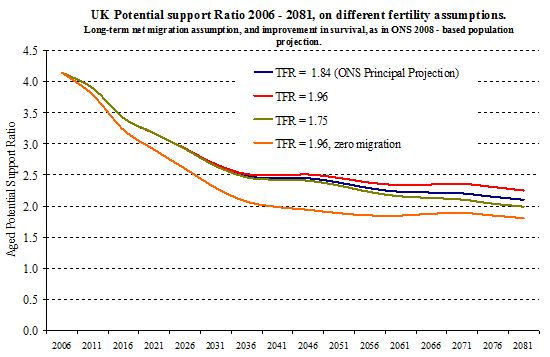 7 It is, in practice, virtually impossible to maintain the present support ratio of 4.15. Calculations in ‘Population Trends’ the official demographic journal[1] demonstrated the level of immigration required to maintain the potential support ratio of 4.2 (at birth and survival rates assumed in 1998, which were somewhat lower than today’s). Keeping to that goal would require a growing but variable number of immigrants peaking at 1.2 million per year before 2051 and up to 5 million per year later in the century. That would increase UK population to 119 million by 2051 and 303 million by the end of the century and so on to the stratosphere.

8 Every serious study has come to the same conclusion. In November 2003, the House of Lords Economic Affairs Committee dismissed this argument. They reported:

"We conclude that… it is neither appropriate nor feasible to attempt to counter the trend towards a more aged society in the UK through a manipulation of immigration policy".

9 In November 2004, the UN World Economic and Social Survey put it even more strongly:

"Incoming migration (to Europe) would have to expand at virtually impossible rates to offset declining support ratios, that is, workers per retirees".

10 The major review of pensions in the UK conducted by Lord Turner dismissed the suggestion in their preliminary report in the following terms:

"Only high immigration can produce more than a trivial reduction in the projected dependency ratio over the next 50 years. Net inward migration at +300,000 per year could bring the 2040 old-age dependency ratio down from 47.3% to 42.1%. But it is important to realise that this would only be a temporary effect unless still higher levels of immigration continued in later years, or unless immigrants maintained a higher birth rate than the existing population, since immigrants themselves grow old and become pensioners who need workers to support them."[2]

12 Finally, the Select Committee on Economic Affairs of the House of Lords, reporting on the economic impact of immigration in April 2008[3] concluded that:

"Arguments in favour of high immigration to defuse the "pensions time bomb" do not stand up to scrutiny as they are based on the unreasonable assumption of a static retirement age as people live longer, and ignore the fact that, in time, immigrants too will grow old and draw pensions. Increasing the official retirement age will significantly reduce the increase in the dependency ratio and is the only viable way to do so."

13 Given the consistent weight of expert opinion, it is surprising that anyone should even attempt to run this argument.

Immigration and the Economy: MW 179