1 A massive increase in workers remittances to Pakistan may be a further pointer to large scale illegal immigration. There could be as many as 200,000 from that country. A comparison with remittances to the Philippines also shows a rapid increase but the number of those born in the Philippines and in employment in the UK has trebled in the same period.

2 Recent press reports have drawn attention to significant numbers of fraudulent students from Pakistan. An examination of workers remittances shows that they are now more than six times higher than in 2001 while, according to the Labour Force Survey, the number of Pakistani workers in Britain has risen by only 67%. This is illustrated in the following graph:

3 The information about remittances comes from the State Bank of Pakistan and is recorded in US $. Despite the 25% fall in the £ against the US Dollar in 2008, remittances from the UK continued to increase. (There will also be other remittances sent by informal means).

4 It may be that, as conditions worsen there, those working in Britain send more money back to Pakistan and the earthquake in October 2005 may account for a "blip" in 2006. But the main explanation for such a rapid increase can only lie in a very large number of illegal workers sending money home.

5 How many does this point to? In 2001 about 108,000 workers remitted $80m or about $750 a head. Assuming, for example, that remittances per head have doubled since then, the current flow of $520m a year would require about 350,000 workers to send home $1500 each year. However, only 180,000 Pakistani born workers appear in the official Labour Force Survey so the remaining 170,000 workers needed to reach this level of remittances are likely to be working illegally. But illegal workers are likely to be paid less than those here legally, so there could well be, on this very rough calculation, as many as 200,000 Pakistanis working illegally in Britain.

6 Not all will have come as students. As there are still no checks on departure, a proportion of those coming as visitors might well stay on after their visas expire. In the five years 2004-8 over half a million visas were issued in Pakistan, including nearly 60,000 student visas[1]. Others could have arrived on the back of a truck.

7 As a cross check we examined the picture for the Philippines. It appears to be different. Remittances from the UK to the Philippines in 2008 were nearly six times those in 2001 but the number of Filipino born in the work force trebled over the same period. These figures imply that each working age Filipino was sending $3,700 home in 2001 and $7,250 in 2008 or roughly twice as much (as we assumed for those born in Pakistan). This is illustrated in the following graph: 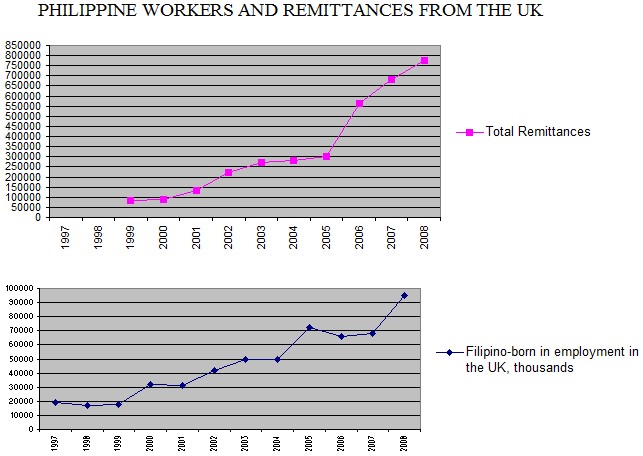 8 The only plausible explanation for such a rapid increase in remittances from Pakistan is a sharp rise in the number of illegal immigrants sending money home. This paper only attempts a ball park figure but it points to a matter of considerable concern.