Direct refugee immigration to the UK 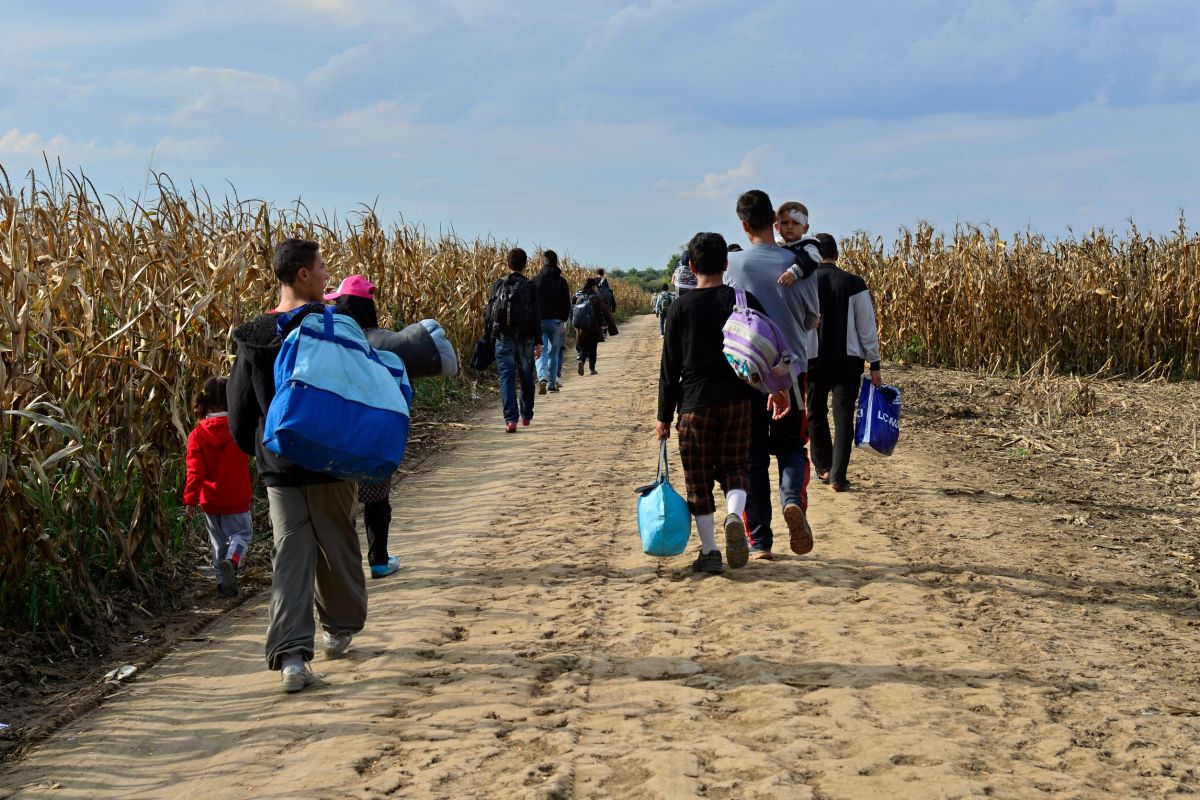 1. Around a third of a million refugees have come to the UK using 13 different refugee routes since 2005, including around 240,000 people in just the past year.

3. The figures do not include main applicants or accompanying dependants of those afforded protection in the UK after claiming asylum following arrival by other means, of which there have been about 125,000 grants since 2004/2005[2]. (In addition, there have been just under 250,000 refused asylum claims since 2005 - a declining proportion of whom will have been removed from the UK or departed voluntarily).

5. Table 1 below shows that, during the period from 2005 to 2022, 13 different resettlement or relocation routes have been in place. If more than 60,000 refugee family members subsequently joining refugees are included, the total approaches 400,000 (larger than the present population of Leicester, which, according to the ONS, was 360,000 in 2020/21). However, it should be noted that some of those coming via the refugee family reunion scheme will be joining those granted protection after claiming asylum following entry to the UK by other means, including illegal arrival by boat, lorry or air.

Where does the data come from?

6. The data was compiled from a range of sources, including Home Office (HO) resettlement, visa and extensions data[3], and the specific HO bulletins on Afghan and Ukrainian arrivals.[4]

7. However, unfortunately the data provided with regard to Afghanistan resettlement in the past year has been unacceptably patchy and incomplete, with the government failing to disclose how many people have been resettled to the UK respectively via the two specific resettlement routes – the Afghan Citizens Resettlement Scheme (ACRS) and the Afghan Relocation and Assistance Policy (ARAP); we have only been given an overall figure of 21,450 people coming from Afghanistan but not even any clear indication of which exact time period this covers.

8. The public have had to rely on incomplete information from Parliamentary Answers by Ministers, correspondence from the government to parliamentary select committees or obscure data releases by the government such as the one issued in August 2022.[5] This latter document states that, as at 12 August 2022, 21,450 Afghans had arrived via two resettlement schemes during or after the Taliban takeover but did not include a breakdown of the number of British nationals within this total, nor the number of total arrivals who arrived via each individual resettlement route.

Table 1: Refugees and dependants directly coming to the UK since 2005, by route.

Figure 1: Refugees directly coming to the UK since 2005 (not including refugee family reunion).[6]

1. Refugee Family Reunion = 63,929 arrivals (Figures available for 2010 to 2022 only). The UK allows an adult granted refugee status or humanitarian protection to be joined in the UK by their spouse or partner and any of their children who are under 18, if they formed a part of the family unit before the refugee fled their country.

2. Gateway Protection Scheme = 9,789 arrivals (2005 - 2020). Although figures are only available from 2005 onwards, this route was opened in 2004. It was operated by UK Visas and Immigration in partnership with the United Nations High Commissioner for Refugees (UNHCR). It offered a legal route for up to 750 refugees to settle in the UK each year, and was separate from the standard procedure for claiming asylum. Applications for resettlement under this programme were made to the UNHCR, which refers them to the UK. Applications could not be made directly to the UK government, to British diplomatic posts abroad or through other international organisations. All applications were assessed individually on their merits.

3. Mandate Scheme = 437 arrivals (2008 - 2019). The Mandate Resettlement Scheme was a global scheme that ran from 2004 to 2019 which resettled recognised refugees with a close family member in the UK who was willing to accommodate them. Beneficiaries of the Mandate scheme needed to have been recognised as refugees by UNHCR and judged by them to be in need of resettlement. The refugee must have been a minor child, spouse, or parent or grandparent aged over 65 of someone settled in the UK, or who had limited leave to remain in a category leading to settlement, who was willing to accommodate and support them. The UK relative did not need to hold refugee status. The government only considered wider family members (e.g. adult siblings) in exceptional circumstances.

4. Vulnerable Persons Resettlement Scheme (VPRS) = 20,319 arrivals (2014-2020). This was launched in January 2014 for refugees of any nationality still in the Middle East and North Africa region (i.e. in Egypt, Iraq, Jordan, Lebanon and Turkey) that have fled Syria because of the current conflict (i.e. after March 2011). Over 20,000 people were resettled in the UK under this scheme.

5. Vulnerable Children's Resettlement Scheme (VCRS) = 1,838 arrivals (2016-2020). This was launched in 2016, with the aim of resettling up to 3,000 ’at-risk’ refugee children from the Middle East and North Africa region, including their families. The government says it worked closely with UNHCR to design the scheme and on their recommendation the scheme did not solely target unaccompanied children, but also extended to vulnerable children at risk, such as those threatened with child labour, child marriage and other forms of abuse or exploitation. It was open to all at risk groups and nationalities within the region.

7. UK Resettlement Scheme (UKRS) = 1,685 arrivals (2021 to present). In June 2019, the Home Office announced a continued commitment to resettlement with a new global scheme to start in 2020. In the first year of operation, the aim was to resettle 5,000 people. However, this goal was hampered by the Covid pandemic. This consolidates the Vulnerable Persons’ Resettlement Scheme, the Vulnerable Children’s Resettlement Scheme and the Gateway Protection Programme into one global scheme. The Government has said: “The new programme will be simpler to operate and provide greater consistency in the way that the UK Government resettles refugees. It will broaden the geographical focus beyond the Middle East and North Africa. A new process for emergency resettlement will also be developed, allowing the UK to respond quickly to instances when there is a heightened need for protection, providing a faster route to resettlement where lives are at risk.”

8. and 9. Afghan Relocation and Assistance Policy (ARAP) and Afghan Citizens Resettlement Scheme (ACRS) = 21,450 arrivals (2021 to present). The government does not comprehensively break down the figures for the total number of Afghan citizens resettled here but has provided an overall figure for those resettled under the two schemes of 21,450 (as at August 2022). The ARAP remains open to any current or former staff employed directly by the government in Afghanistan since 2001, who are assessed to be at serious risk of threat to life, regardless of employment status or length of time served. The scheme is open-ended and there is no numerical limit. The policy provides for the main applicant to bring their close family members (spouse and under 18 children) and they will be granted Indefinite Leave to Remain. Other family may be come in exceptional circumstances. The scheme opened in April 2021. The first ARAP flight was on 22 June 2021. Since then, around 7,000 Locally Employed Staff and their family members have been relocated. Other arrivals included 500 ‘special cases’ evacuated in August 2021 who were identified as being particularly at risk, including female politicians, members of the LGBT community, women’s rights activists and judges and Chevening scholars (see government factsheet).[7] Meanwhile, the ACRS was announced in August 2021 but began operation in early January 2022 with the first families arriving that month. 20,000 people will be allowed to resettle in the UK over the course of five years (see government factsheet).[8]

10. Hong Kong Pathway to Citizenship = 116,702 arrivals (not including extensions of stay in the UK on this basis - 2021 to present). On 31 January 2021, the UK opened a new route for Hong Kong British National (Overseas) citizens (BNOs) and their close family members. Under the new route, an estimated 5.4 million Hong Kong residents will be eligible to move to the UK and eventually become British citizens.

11. Ukraine Family Scheme (UFS) and 12. Ukraine Sponsorship Scheme (USS) = 151,482 entry grants (not including extensions of stay in the UK on this basis). Launched in March 2022, the UFS allows immediate and extended family members of British nationals and people settled in the UK to come to the country. Those joining the Scheme will be granted leave for three years, giving them certainty and ensuring their future in the country. The Scheme is free and does not include any salary or language requirements (see factsheet). Meanwhile, launched on 14 March 2022, the USS allows individuals, charities, community groups and businesses in the UK to bring Ukrainians to safety – including those with no family ties to the UK. The sponsor must be either: a named sponsor who can provide accommodation for a minimum of 6 months. Those applying must be Ukrainian, or the immediate family member of a Ukrainian national who has been granted permission under, or is applying to and qualifies for, the Homes for Ukraine Sponsorship Scheme. (see government announcement). As of as of 11 October 2022, the government said a total of 191,000 had been issued under the schemes since their introduction in March 2022, allocated as follows: Ukraine Family Scheme visas: 53,800; Ukraine Sponsorship Scheme visas: 137,200 (this contrasts with the figures above which are for the year to June 2022 only).

13. Afghan Ex-Gratia Resettlement and Redundancy Scheme = 1,200 arrivals (2013-2021). In 2012 the government introduced this resettlement scheme for working staff who had been in post working directly for the UK Government. This eventually covered those who worked for the UK on or after 1 May 2006. The scheme was meant to be reserved for ‘the most serious cases’. Applicants also had to have served more than 12 months when they were made redundant or resigned.

Table A: Refugees coming directly to the UK since 2005 each year, by route.

Note 1: The rows highlighted in blue are for reader information and do not contribute to the calculation of the grand total in the bottom row.

Note 3: The refugee family reunion data is only for the period 2010-22. Data for 2005-09 does not appear to be publicly available at the present time.

Note 4: Data on Afghanistan resettlements is incomplete and should be treated as ‘provisional’, with the Home Office stating: “Following the evacuation from Afghanistan, the Home Office is working to assure information relating to all the individuals relocated on case working systems.”. It is not broken down between different routes as the Home Office does not appear to have yet confirmed how many people have come via each scheme. The exact time period during which people came in is also unclear. We make a rough and cautious estimate that at least 75% of the 21,450 total who have come from Afghanistan since early 2021 came during the year to June 2022, with the remainder coming in earlier parts of 2021. ARAP stands for Afghan Relocation and Assistance Policy and ACRS stands for Afghan Citizens Resettlement Scheme.

Helping Ukrainians Fleeing The Russian Invasion
Resettlement of Afghan citizens to the UK
How many people are expected to take up the new Hong Kong visa?
Non-EU immigration