Options for Romanian and Bulgarian migrants in 2014

1. The UK, Germany, France and the Netherlands are the four major countries opening their labour markets in January 2014. All four are likely to be financially attractive destinations for those wishing to migrate from Romania and Bulgaria but high unemployment might make France less attractive. There will also be a strong financial incentive for those Romanians and Bulgarians now in Spain and Italy to migrate North.

2. During a seven year transition period free movement could be confined to students, self employed and self sufficient persons in those countries that wished to protect their labour markets. From the beginning of next year transitional controls must end for Romanian and Bulgarian citizens and they will have full access to all the labour markets of the European Union. Some countries chose to grant Romanian and Bulgarian nationals full and immediate access in 2007- including the Czech Republic, Estonia, Cyprus, Latvia, Lithuania, Poland, Slovenia, Slovakia, Finland and Sweden. However, Denmark, Greece, Spain, Hungary and Portugal chose to lift transitional controls after two years (although Spain has since reimposed controls for Romanian nationals utilising their safeguard clause by agreement with the European Commission). Ireland and Italy lifted controls in 2012 although the sharp inflow to Italy appears to have begun in 2007 (Annex C). The UK has continued to impose transitional controls along with Germany, France, Malta, the Netherlands and Austria; these will end on the 1st January 2014.[1]

3. A single person in Romania on half of the average would have a take home income of £3,200 per annum once the cost of living has been accounted for. The same person in Bulgaria would earn slightly less - £3,000. (See Annex A)

4. If workers were to move from Romania or Bulgaria to Spain or Italy and were to earn half the average wage they would be able to earn three times more. Moving to France, Germany, Ireland or the Netherlands would increase their wage by a factor of four. In the UK on half the average wage (£7.14) they would receive nearly five times as much as they had earned at home. Take home pay (after including benefits) in the UK therefore offers Romanians and Bulgarians a somewhat greater financial incentive than in the other major EU countries.

5. There are nearly 900,000 Romanians in Spain and over a million in Italy. There are also around 250,000 Bulgarians in these two countries[2]. They are attracted by language similarities and, no doubt, amnesties granted over the years. High unemployment could encourage these people to move elsewhere in Europe. Single Romanians in Spain could increase their wage by 40% by moving to the UK, and by almost 50% by moving from Italy to the UK if they earned half the average wage in both countries.

6. An individual with spouse and two children on half the average wage in Romania will have a post-tax income of £4,000; in Bulgaria he would receive £3,800.

Other Factors that could influence Migration Patterns

8. The unemployment rate in the UK is higher than in Germany and similar to that of the Netherlands but lower than France, Italy and Ireland. Given the extremely high level of unemployment in Spain it is unlikely that A2 nationals will choose to move to Spain for work – most of those who so wished will already have done so. It is possible that Romanians who are currently in Spain will choose to migrate to Northern Europe where unemployment is lower but there is little evidence that this has happened thus far. (See Annex C) Despite the economic incentives, migration to Ireland may be limited by the higher unemployment rate in that country.

9. Youth unemployment in the UK, at 21%, is lower than Spain, Italy and Ireland and similar to France. However, it remains considerably higher than in the Netherlands and Germany where youth unemployment is only 10% and 8% respectively:

12. Romanian and Bulgarian migrants in Spain and Italy may choose to move to the North of Europe where employment opportunities are considerably greater as are financial rewards.

13. In light of this analysis we stand by our central estimate that 50,000 people from Romania and Bulgaria will move to the UK each year for five years.[3]

Annex A – Income of Single Individual on 50% of Average Wage in various countries, converted to £ to take account of cost of living 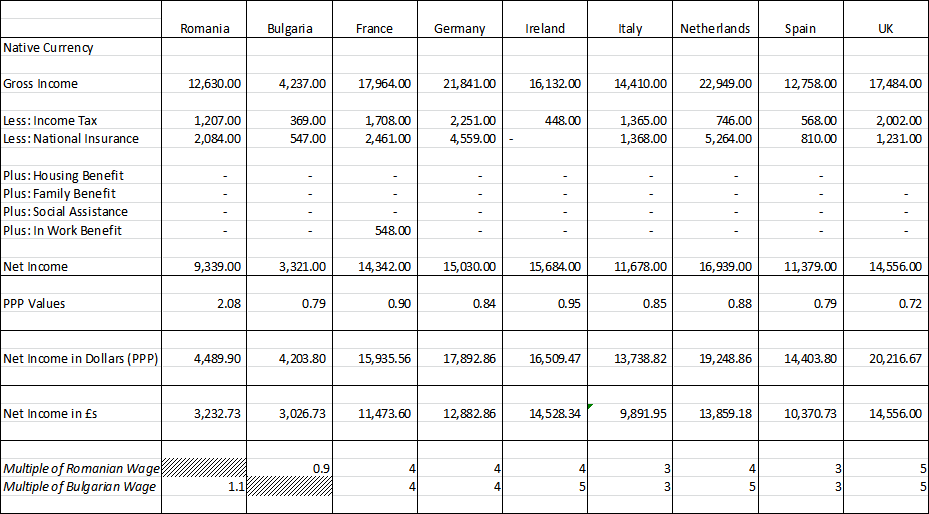 Annex B - Income of Individual with Spouse and Two Children on 50% of Average Wage (Partner not working), converted to £ to take account of cost of living 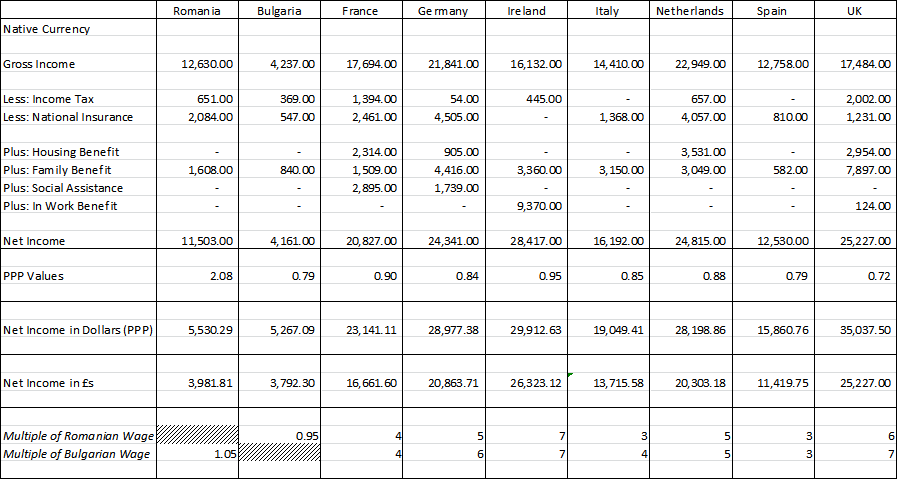 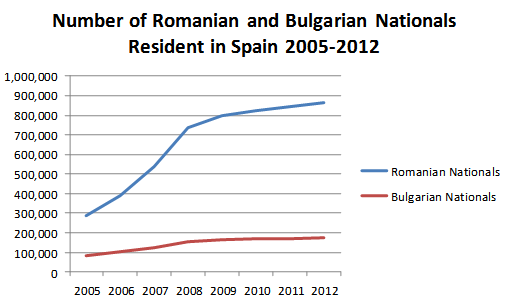