The UK Government’s Proposal on EU Citizens’ Rights – An Overview

1. The UK government has now published a detailed proposal on the future rights of EU citizens living in the UK before the UK leaves the EU.[1] The main elements are summarised below. The UK is of course negotiating with the European Union, which has taken a different view of those who should be covered by any agreement, which rights should be protected in the future and how they should be enforced. For more details on the European Union proposals, see Briefing Paper MW 412. This document summarises the UK proposal. The final agreement may well be different so this document should not be read as advice as to what EU citizens should do next.

The Basics of the Proposal – Who can remain after Brexit?

2. Until the UK leaves the European Union, EU citizens will continue to have the right to come to the UK under free movement rules. However, after Brexit, free movement will end and a new regime will be introduced to govern movement from the EU to the UK. The future framework will be either decided as part of the negotiation with EU partners or unilaterally by the UK government (presumably this would be the case if the negotiations break down).

3. EU citizens who have lived in the UK for five years when the UK leaves the EU will qualify for ‘settled status’ under forthcoming legislation.

4. EU citizens who have lived in the UK but who have not lived for five years by the time the UK departs the EU will be allowed to remain in the UK and will be granted a temporary residence card which will entitle them to continue to accrue time towards ‘settled status’, so long as they arrived before a cut off date. This date is to be negotiated between the UK and EU partners, but will be at some point between 29th March 2017 (the day the UK government notified the European Union of its intention to depart the EU under Article 50) and the date that the UK actually leaves the EU.

5. Those EU citizens who arrive after the cut off date will be granted temporary leave to remain when the UK leaves the EU and may be able to remain permanently, ‘depending on their circumstances’ but they ‘should have no expectation of guaranteed settled status’.

6. ‘Settled status’ means that no immigration conditions will be placed on their residence so long as the person continues to live in the UK. In that sense ‘Settled status’ will be the same as present arrangements for non-EU citizens who can apply under certain circumstances for ‘Indefinite Leave to Remain’ (ILR) after five years. Settled status is not the same as citizenship – it does not confer on the holder a UK passport and nor does it give the holder the right of abode in the UK. Instead they have a right of residence in the UK which is conditional on their continued residence. ‘Settled status’ could be lost if the holder is absent from the UK for a continuous period of more than two years, unless they have ‘strong ties’ to the UK.

7. The government have produced a summary diagram of their proposal, which is reproduced below. 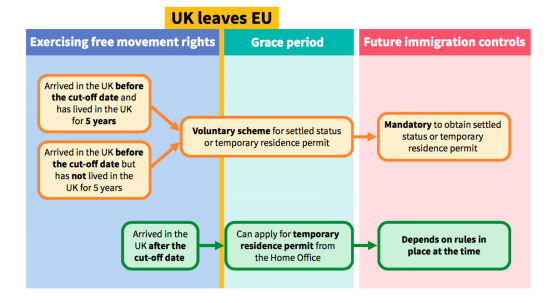 8. EU citizens currently residing in the UK do not need to apply for ‘Settled Status’ before Brexit, indeed the scheme is not due to be open until 2018. The Home Office will instead ‘provide a period of blanket residence permission’ which will begin on the day that the UK leaves the EU. They say that this will be a ‘generic ‘”umbrella” of temporary leave applying to all existing lawful EU residents (and their family members)’ which will give EU citizens time between the end of free movement and the time that they obtain their residence document in which they can remain lawfully.

9. EU citizens will have a grace period (expected to be up to two years) in which they must apply for their individual ‘settled status’ or a temporary residence document which allows them to continue to accrue time towards ‘settled status’ if they arrived before the cut off date (between Article 50 day and Brexit day).

10. Those who arrive after the cut off date will also have to apply for a temporary residence document, but again the government are clear that they ‘should have no expectation of guaranteed settled status’. Once the grace period has expired, those who arrived after the cut off date will have to obtain further permission to remain. Eligibility will depend on those rules in place at the time and these are yet to be decided.

11. Anyone who has not applied for individual residence by the time the grace period has expired will no longer have the right to live in the UK.

12. EU citizens in the UK now or who arrive before the cut-off date who qualify for ‘Settled Status’ and those who qualify for a temporary residence card with a pathway to ‘Settled Status’ will continue to have full access to the labour market, meaning that they will be able to look for and take up work as an employee or on a self-employed basis (they will also be allowed to live on a self sufficient basis or to study). Before the UK leaves the EU, EU citizens will continue to be able to come to the UK to look for work or take up a job even after the cut off point but after the grace period has expired EU citizens will have to obtain further permission to remain if they wish to continue working in the UK. Thus permanent rights are guaranteed only for those arriving before the cut-off date.

What Social Welfare and Public Services Rights will they have?

13. EU citizens who qualify for ‘Settled status’ will be able to access public services and welfare (including pensions) ‘on the same basis as a comparable UK national under domestic law’.[2]

15. This means that EU citizens who are living in the UK now or arrive before the cut-off date will be able to have continued access to benefits and tax credits (if their circumstances qualify), pensions, the NHS, and education (including higher education). However, no such rights are guaranteed to those arriving only after the cut-off date or for anyone coming to the UK in the future after the UK has left the EU.

16. Family members (EU and non-EU spouse/partners, children under 21 years of age, parents in the case of those EU citizens under 21 who live with and are dependants of that parent, and dependent parents[3]) of eligible EU citizens will also be able to apply for ‘Settled Status’ if they arrive in the UK before the UK leaves the EU and have lived lawfully for five years.

17. Alternatively, if they arrive before the UK leaves the EU but at that point have not yet lived lawfully for five years they can apply for a temporary residence document that will allow them to continue to accrue time towards ‘Settled Status’.

19. With regard to family members, it does not matter whether they arrive before or after the cut off date but they must arrive before the UK departs the EU to benefit from these arrangements.

20. Future family members who arrive after the UK leaves the EU, such as a future spouse, will be subject to the same rules that currently govern non-EU family migration (i.e. the sponsor must have a minimum income of £18,600 to bring a spouse/partner, and more if they are also sponsoring dependent children) or alternatively satisfy the post-exit immigration arrangements.

21. The children of EU citizens who are eligible for ‘Settled Status’ will also be eligible for this same status, regardless of where they were born, and regardless of whether they were born or arrived in the UK before or after the cut off date. Parents must apply for permission to remain on behalf of their children as every person must have a residence card specifying their right to remain after the grace period has expired.

22. The government have made clear that they believe that the rights of EU citizens living in the UK should be overseen by the UK courts.

What are the main differences between the UK and EU position?

23. First, the UK government is of the view that only those who arrived in the UK before the cut off date (to be negotiated) should be guaranteed settled status after five years of lawful residence. The EU has taken the view that anyone who has ever lived in the UK should be covered – potentially involving at least 6 million EU citizens, rather than the 3 million currently resident.

25. There are also differences over what rights should be preserved in the future. The EU has suggested that all rights derived from Union law should be preserved after Brexit. While the government proposal includes the maintenance of the vast majority of rights that EU citizens currently enjoy, the main difference is that the right to future family reunion (i.e. the right to bring a future spouse/partner to the UK) will no longer be unrestricted and sponsors will have to meet the UK domestic immigration requirements that British citizens and non-EU third country nationals settled in the UK currently have to fulfill.

26. The final key difference is legal oversight, which the UK government is clear should be by UK judges. The EU is of the view that citizens’ rights should be upheld by the European Court of Justice. A compromise solution might involve an independent arbitration court (staffed by UK and EU judges) being set up to enforce the rights of EU citizens in the UK and UK nationals living elsewhere in the EU.

The UK Proposal can be found here: https://www.gov.uk/government/uploads/system/uploads/attachment_d… 621848/60093_Cm9464_NSS_SDR_Web.pdf
The glossary to the Policy Paper outlining the UK offer on EU Citizens’ Rights states that ‘A UK national is the term referred to in this document to describe those people who are regarded as UK nationals for EU law purposes.’
See here for the definition of a family member in EU law: http://www.mvcr.cz/mvcren/article/the-definition-of-a-family-memb… -liechtenstein-and-switzerland.aspx
Print Briefing Paper Download PDF