ONS statistics regarding employment by country of birth

The reliance on overseas labour continues. A rise of nearly a quarter of a million non-UK born workers, of whom 157,000 were non-EU and 81,000 EU, is astounding. Worryingly, both the Conservatives and Labour are proposing policies that will likely boost these numbers and in Labour’s case, turbo-charge them. That is senseless.

It’s time politicians gave serious thought to pressing employers to focus more on training our own, raising wages and improving conditions, rather than relying on cheaper, and perhaps more malleable, overseas workers.

Figure 2: The number of non-UK-born people working in the UK has generally increased over the last 20 years 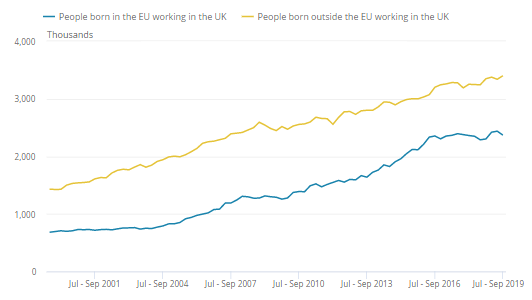