The Migration Observatory has today published a report attacking the concept of a population target of 70 million and questioning whether it can be achieved.

They accept that immigration accounts for 68% of our population growth and that the latest official projection will take the UK’s population to 70 million in 15 years.

The government is now on course for net migration of 100,000 a year.   The only question, given that the rules cannot be changed for those already here, is precisely when it will be achieved.   A further reduction to 50,000 would depend on net EU migration coming back towards balance as it always has in the past.   This is perfectly possible in the medium term, given the fall in the birth rate in many EU countries and the likelihood that some of the East European economies will eventually improve.

Commenting, Sir Andrew Green, Chairman, Migration Watch UK said “Yet again the Migration Observatory seem to be beating the drum for the immigration industry.  They cannot get it into their heads that we are a democracy and that there is an overwhelming public demand to reduce immigration.  Net migration from 1990-96 averaged 39,000 a year before New Labour opened the floodgates (see graph below). That is roughly the level needed to hold our population below 70 million and it should now become the objective of policy.  It is a vital aiming mark”. 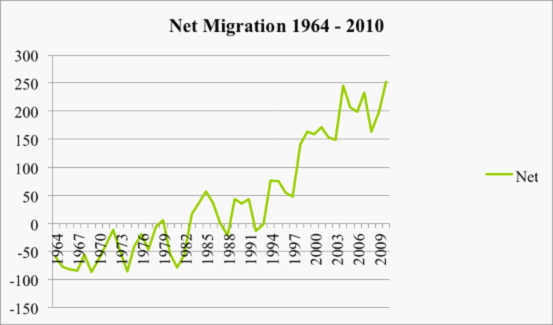