Think-Tank had Immigration Figures Spot on Almost 10 Years Ago

Figures just out show that the number of migrants coming to Britain in the decade ending next year was correctly predicted by think tank Migration Watch – almost 10 years ago.

In 2002 the then newly launched organisation warned that "on current trends we can now expect a net inflow to Britain of at least two million non-EU citizens per decade". The prediction made clear that this included an estimate of 60,000 per year for illegal immigrants of various kinds.

The latest figures (Annex A) show just how telling that prediction was with a total of net non-EU immigration between mid year 2002/03 and mid year 2009/10 of 1.679 million - or over 200,000 a year - and this is without an allowance for illegal immigration.

Said Sir Andrew Green, Migration Watch UK chairman: ‘The latest official statistics demonstrate very clearly that, in addition to just over half a million immigrants from the EU, net non-EU immigration is absolutely on course to hit two million in 10 years as we predicted in August 2002.

‘At the time our projections were met with howls of derision - and often abuse – by the immigration ‘industry,’ particularly in the left wing press,’ he said. ‘They tried very hard to denigrate our research and rubbish our findings with accusations that were thinly disguised but clearly meant to imply a racist agenda,’ he said.

‘In fact our figures and predictions have been consistently accurate since our formation, however much they have tried to pretend otherwise.’

An example of the opprobrium heaped upon Migration Watch was this editorial in the Independent on August 6, 2002: "Most offensive of all is the choice of name, a grotesque echo of such groups as Human Rights Watch, with the implication that it is keeping a watch on Ministers who sneakily disguise the true extent of immigration. Migrationwatch UK is a nasty little outfit, and its duplicitous research should be treated with the gravest suspicion. The group deserves to fail; sadly in the current climate, it will continue to be given the oxygen of publicity".

An article in the Guardian of 7 August 2002 was entitled "A swamp of muddled thinking". It described the figure of two million as flawed, both in its composition and its assumptions.

It gives us no pleasure to see that we were right as we have indeed seen the largest wave of immigration in our history, with no public consultation, explanation or coherent justification,’ he said. ‘It is now abundantly clear that the public do not share the enthusiasm for the mass immigration that has changed parts of the UK beyond recognition and has, in many cases, weakened community cohesion.

Said Sir Andrew: ‘It is shameful that the political system was intimidated for so long by false innuendo from the Left about racism. As a result, three million immigrants were admitted by the previous government between 1997 and 2010 while one million British citizens left the UK. All this took place without proper debate and in flat contradiction to the wishes of the British people. Nowadays the public are clear that enough is enough and they can, at last, express their view by signing our “No to 70 million” petition on the Downing Street website. 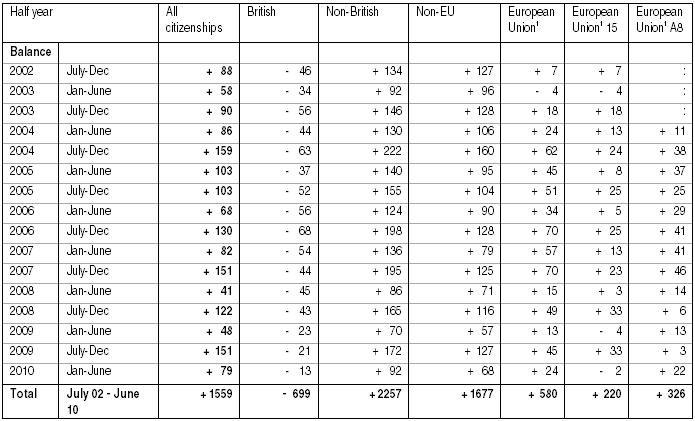