Debating immigration has been marginal to this leadership election. That should change

The Conservative Party is clearly struggling after disastrous results in the European elections and the Peterborough by-election. So it is astonishing that we are now well into a leadership contest with barely a peep from the candidates on an issue that is crucial to our country’s future and therefore of real importance to the membership. I refer, of course, to immigration.

The political, economic and foreign policy crises that are encompassed by Brexit have rightly been at the top of the agenda. But there is a serious risk that a crucial long term problem will be ducked or, worse still, exacerbated. In ten years time, Brexit will be sorted one way or the other. But, if we are not careful we might find ourselves set on an immigration policy that will change the whole nature of our society against the wishes of a strong majority of our people.

In short, our country has reached a crossroads on immigration, and so has the Conservative Party. The current massive levels of immigration could be reduced without serious damage to our economy, were there sufficient political will. The forthcoming leadership election will therefore be the moment to decide whether to go for a leader who is prepared to tackle immigration or for one who has failed to heed the public’s repeated calls to reduce it.

The situation is certainly serious. Annual net migration into the UK has averaged nearly 300,000 over the past five years – that is roughly the population of Newcastle. Yet, until Labour came to power in 1997, net migration was never more than 50,000 a year and was sometimes negative. Since 2010, nine years of Conservative Government have failed to get a grip on it, as the graph below clearly indicates. 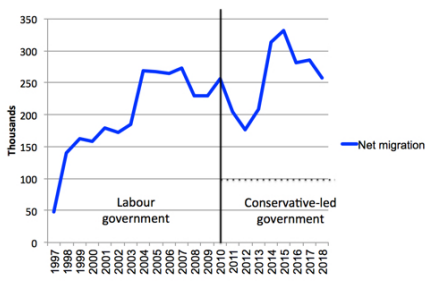 The implications and consequences for our future are stark. A level of net migration continuing at present levels would take our population from about 66 million today to 100 million by the end of the century. Yet, as the graph below illustrates, achieving the Conservatives’ promise of reducing net migration to 100,000 a year would restrain the increase in our population to between 70 and 75 million. 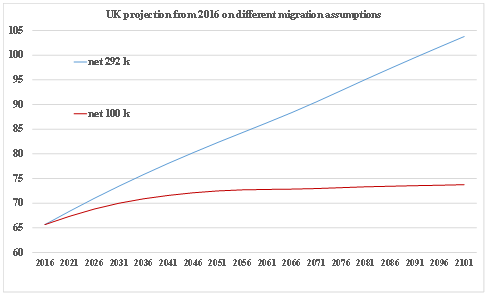 As I have already suggested, the character and nature of our society are already being changed without the consent of the majority of our population, three quarters of whom support the reduction of net migration levels to the ‘tens of thousands’.

It is not just about numbers. I was struck by a recent article in Prospect  by Tom Smail. He lives in Haringey in North London, and he wrote: “Immigration has become not, as I once thought, a welcome addition to the English way of life, but a source of disquiet.” He continued “I speak four languages …. but the multiplicity of languages outside my front door and the almost total absence of English leaves me feeling like a stranger in a once familiar land”.

He explained later that “it is not that I prefer English people to other people. Frequently I do not. It is that, in order to have a functioning, cohesive society, there needs to be some shared sense of what that society is.”

There is indeed evidence that mass immigration is damaging the bonds that bind our community together. Demos found in 2018 that 71 per cent of Britons believe that immigration has made communities more divided. This reached 78 per cent in areas that had experienced large-scale immigration in recent years.

Of course scale matters. In the words of Policy Exchange’s David Goodhart: “Too many people coming too quickly into a society makes it difficult to retain a sense of cohesion and stability.” In a similar vein the former integration czar, Louise Casey, has warned that we risk sleep-walking into an increasingly segregated country.

It would be absurd to blame individual migrants for these difficulties. The problem is one of scale. That is a problem for the government, and it has been ducked for too long.

Some of the loudest voices in favour of the status quo are those who have, since free movement applied to Eastern European countries in 2004, been able to acquire the skilled workers they need for lower wages and without paying the costs of training British workers. Their financial interest is clear, but it is by no means clear that there is overall benefit to our society as a whole.  There is no persuasive evidence for the UK that immigration has increased GDP per head. On the contrary, it has been roughly flat for the last ten years despite massive levels of immigration.

So the question for Conservatives comes down to this. Is there a leadership candidate who will have the courage and determination to tackle this matter which is so vital to the future of our country? I will explore this question further in a second article on Thursday.

Net Migration Statistics
What Is The Problem?
What Can Be Done?
Population by Country of Birth
Print Press Article