At long last! Real action on migration — so why do I still have concerns? 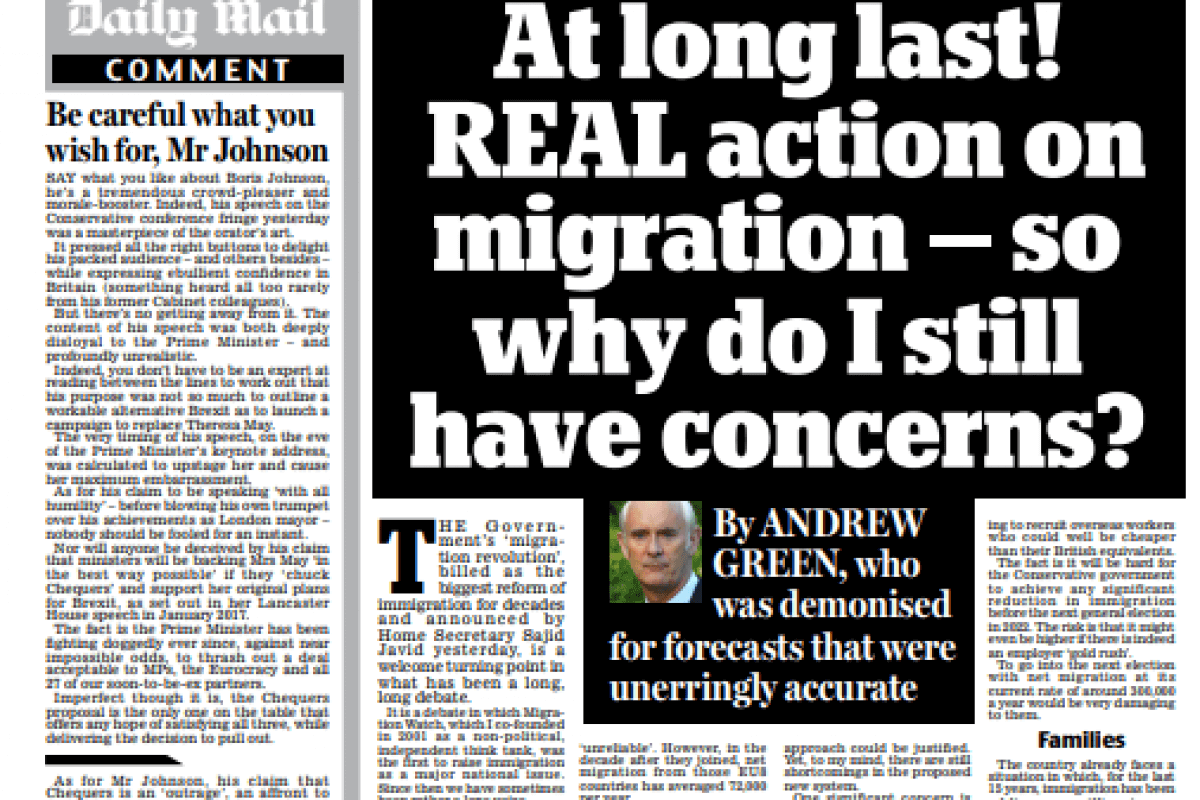 The government’s ‘migration revolution’, billed as the biggest reform of immigration for decades and announced by Home Secretary Sajid Javid yesterday, is a welcome turning point in what has been a long, long debate.

It is a debate in which Migration Watch, which I co-founded in 2001 as a non-political, independent think tank, was the first to raise immigration as a major national issue. Since then we have sometimes been rather a lone voice.

Indeed, in the early days we attracted plenty of flak. Immigration under Labour had tripled in just a couple of years from 1997 to 1999.

We were determined to bring to public attention the risks of such a lax immigration policy whatever misplaced insinuations of ‘racism’ might be laid against us.

Estimating future immigration is more of an art than a science, but we have a remarkable record in doing so accurately.

In 2002, we estimated that non-EU net migration would run at two million over the next decade. At the time our projections were met with howls of derision, sometimes abuse.

The Independent newspaper dismissed Migration Watch as a ‘nasty little outfit’ and said that our ‘duplicitous research should be treated with the gravest suspicion. The group deserves to fail.’

The Office for National Statistics later proved us right, estimating that legal non-EU net migration in the period 2002-2011 was 2.1 million.

In 2003, we described as ‘almost worthless’ estimates relied on by the Home Office that there would be between 5,000 and 13,000 arrivals annually from the so-called EU8 countries of Eastern Europe — the Czech Republic, Estonia, Hungary, Latvia, Lithuania, Poland, Slovakia and Slovenia — following the enlargement of the EU to include them in 2004.

We said instead that 40,000 a year would be a cautious, yet more realistic, estimate.

A journalist from the Right-leaning Spectator magazine described our estimate as ‘unreliable’.

However, in the decade after they joined, net migration from those EU8 countries has averaged 72,000 per year.

In 2013, we estimated that inflows from Romania and Bulgaria would add 50,000 a year to the population.

A Channel 4 News Fact Check said: ‘Predictions of a mass influx of immigrants from Bulgaria and Romania have failed to come true.’ In fact, average net migration from those two countries in the period 2014-16 was 52,000 a year.

I believe it may well be the case that the light Migration Watch cast on the likely scale of EU migration explains why immigration was such a key issue in the 2016 EU referendum.

This makes it all the more important that the new post-Brexit policy pledged by Sajid Javid is truly effective in reducing the scale of immigration.

If not, the credibility of the Government will be in tatters.

The policy certainly has some important positives. It marks the end of free movement —especially for workers who would not qualify for a high-skilled work permit.

From January 2021, we will at last no longer be obliged to accept an unlimited influx of cheap labour — labour which has been very good for employers, but which has also been a factor in keeping the wages of British workers almost flat for a decade.

Under the planned reforms, there will also be only minor hurdles for those who wish to come and go between Britain and EU countries for tourism, family visits and to study.

That is as it should be. The new British immigration system will be based on work permits and, sensibly, will not distinguish between EU and non-EU skilled personnel.

Once we have left the EU, it’s hard to see how any other approach could be justified. Yet, to my mind, there are still shortcomings in the proposed new system.

One significant concern is that the skills required to qualify for such a permit will be lowered from degree level — as is currently the case for non-EU migrants — to the equivalent of A-level. This, of course, will enormously widen the field of migrants allowed to come in.

Examples of those who will be permitted include skilled construction workers, chefs, professional bakers, mechanics and office managers and a number of people in hospitality, care and retail jobs.

Migration Watch estimates that this reduction in the level of skill required for entry to Britain will open up two million more jobs to overseas applicants.

The major change, however, will be the abolition of the cap on work permits. For non-EU workers this has been set for some seven years at an annual level of 20,700 — a figure that is actually quite generous.

Indeed, only in the last year or so has the cap been reached — which, perhaps inevitably, has led to protests from industry that they cannot find the workers they need.

That, presumably, is why it has been abolished. Which means the only condition — apart from the A-level skill criterion — that work permit applicants will have to meet is a minimum salary threshold of £30,000.

The problem with such financial limits is that they can be easily fiddled by less scrupulous employers. If this should occur, it could impact many more jobs in the UK, and it is here that the main risk of the new policy lies. It could trigger a ‘gold rush’ of employers seeking to recruit overseas workers who could well be cheaper than their British equivalents.

The fact is it will be hard for the Conservative government to achieve any significant reduction in immigration before the next general election in 2022. The risk is that it might even be higher if there is indeed an employer ‘gold rush’.

To go into the next election with net migration at its current rate of around 300,000 a year would be very damaging to them.

The country already faces a situation in which, for the last 15 years, immigration has been adding one million to our population every three years — roughly the equivalent of Birmingham.

We are having to build nearly 300 homes a day to house migrants and their families. The public have had enough which is why the Government would do well to proceed with great caution as they implement this new system.

Of course, the genuine needs of business must be met. However, some of the claims being bandied about need to be looked at very carefully.

Employers speak of the risk of worsening labour shortages as a result of fewer overseas workers being available. But this could and should lead to investment in machinery and equipment in place of people, and this, in turn, should result in higher productivity, boosting it from levels that have been virtually flat for too long.

Furthermore, Migration Watch estimates that there are four million people in the UK who either seek work or want to work longer hours. If employers were more flexible some of them could be drawn into the labour force.

Some 63 per cent of the general public think immigration has been too high over the last decade, while for Conservative voters it is 84 per cent.

The plan for a post-Brexit ‘immigration revolution’ is a welcome move. But I fear it will not be enough for Britain truly to get a grip on immigration — which is leading to a rapid and inexorable increase in our population about which the public are justifiably very angry.

Immigration could make or break the Tories
Labour’s new immigration policy is a recipe for serious social tension
On non-EU immigration, the government is asleep at the controls
Here’s an immigration plan that would help to make a success of Brexit
Print Press Article