An Overview of non-EU Students to the UK II

1. The number of non-EU students has increased dramatically since 2000. The International Passenger Survey asks migrants who declare an intention to stay for longer than 12 months their main reason for coming to the UK. The results for non-EU respondents are shown in figure 1 below. 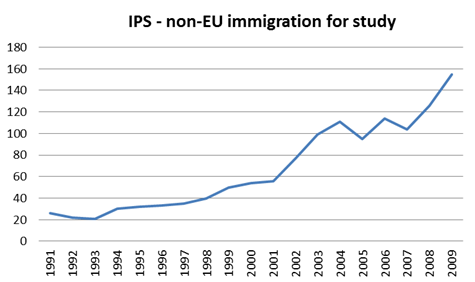 2. It has been suggested that students should no longer be included in the measurement of immigration as they are usually only here for a limited period. However, a stay of 12 months or more is the internationally agreed definition of a migrant. Given that students are now the largest single reason for immigration to the UK, any measurement of net migration that omitted them would lack all credibility. In any case, both departures and arrivals are included in the immigration statistics.

3. Another measure of non EU student flows is the number of visas issued. This gives different results as some who are granted visas decide not to come. Others, such as US citizens are granted permission on arrival and others are coming for less than 12 months and so are not included in the IPS. In 2011 there were over 320,000 student visas issued to non-EU students and in total over 500,000 non-EU students arrived in the UK[1]. EU students do not, of course, need visas (see Annex A).

4. Government policy is not aimed at reducing the number of genuine students for its own sake. Students who come here to study and then return home again are welcome, beneficial to the UK economy and do not contribute to net migration – unless they stay on to work or marry. According to Home Office research, about 20% may do so. The main issue, therefore, is that of bogus students whose main intention in coming to the UK is to work. They may be students at bogus colleges or students who enrol on genuine courses but drop out or overstay their legal leave to remain in the country.

5. The term Points Based System implies that there is an element of selection over who is issued a visa or some bar that can be raised or lowered but this is not the case. To get a visa all that is required is an offer to study from a college and some documentation showing you have the necessary funds and qualifications. The college has a financial incentive to offer the place and in countries of immigration concern the documentation can often be purchased. There are no longer interviews with an immigration officer to determine the credibility of the applicant and the likelihood that he will return home.

6. Perhaps as a result of these deficiencies, student numbers grew by 30% in a single year (2008/9) when the current Points Based System was introduced. Applications from South Asia increased dramatically. In 2008 there were 28,700 student visas issued to India nationals, in 2009 this had grown to 53,900 while student visas issued to Nepalese nationals rose from under 700 to nearly 9000.

7. Home Office Research shows that the majority of abuse has occurred at private colleges offering courses at below degree level. Just over one third of those students who had arrived in the UK to study at private colleges were unaccounted for and considered non-complaint in immigration terms[2]. Abuse in the university sector is believed to be much lower.

8. The government has attempted to tackle this abuse by raising the English language requirements and requiring all institutions that wish to continue bringing in non-EU students to become “Highly-Trusted Sponsors”. This means they will have to show, through attendance records, that their students have a high level of immigration compliance and that the courses they offer have been accredited by a suitable body. Students will also have to show progression in their studies and cannot stay on by repeatedly studying at the same level.

9. It is important to protect the reputation of the UK educational sector as a destination for providing high quality education. These measures should assist that aim.

10. The current scheme that ends in April 2012 allows any graduate from more than 600 institutions to stay on for two years in the UK to look for work. It was described by the independent Migration Advisory Committee as one of the most generous schemes in the world. In 2010 40,000 foreign students took advantage of the scheme. With new graduate unemployment at 20% this is indefensible.

11. From April 2012 foreign graduates who can find an employer willing to sponsor them for a job paying £20,000 a year can continue to stay on. This allows a route for the “brightest and the best” to stay on and contribute.

The impact of government measures

12. The Department for Business, Industry and Skills (BIS) estimates that the changes in student immigration policy will decrease export earnings by around £203 million in 2014/15 and £268 million by 2024/5[3]. The total value of UK education exports is estimated at £17.6 billion in 2015 and £26.6 billion by 2015. Therefore the immigration policy changes will decrease export earnings by around 1% per annum.

13. We believe that a risk based approach needs to be implemented with a return to the use of interviews by an Entry Clearance Officer in countries of immigration pressure. This would allow the credibility of the applicants to be assessed along with their intentions to return home at the end of their studies.

1. Non-EU migrants have two routes to studying in the UK:

3. PBS Tier 4 visa is for migrants who want to come to the UK to continue their education. The applicant is able to work part-time and the length of stay can run into many years (depending on the individual and their study choices). All non-EU nationals need a visa for this route.

4. EU nationals have the right of abode in the UK and that includes the right to study. They do not need visas.

Student visas and student arrivals only apply to non-EU students.

6. The number of arrivals is much higher because it includes those student visitors who did not need a visa prior to travel. In 2010 the following numbers were recorded arriving in the UK.

7. The International Passenger Survey produces an estimate of the number of immigrants coming to the UK for a year or more. This does include EU nationals. One of the questions on the IPS is the main reason for visiting the UK. The numbers who gave their main reason as study in 2010 are.

8. Another view of students is the numbers enrolled on courses at higher education institutions[7].

9. The considerable number of EU students on short English language courses in the UK do not appear in these statistics.