The Impact of Immigration on Maternity Services in England

2 Midwife numbers have not kept pace with the overall growth in numbers of births because governments before 2010 permitted high levels of net migration without making sure that maternity services received adequate staffing; consequently, there has been an acknowledged severe shortage of midwives for several years which has, in turn, led to concern about the quality of midwife services. Key indicators of pressures on maternity services and the resulting shortfall in midwives are shown in Table 1 below:

Table 1: Key Indicators of Pressures on Maternity Services in England: 2000 compared with 2010

3 The number of midwives in England over the past decade has been around a quarter less than the number needed to deliver satisfactory levels of maternity care. The current shortage of midwives is over 5,000.

4 Births to migrant mothers often involve disproportionate demands on maternity services for clinical and cultural reasons so the average cost is higher than for mothers born in the UK.

5 Figure 1 below show the trend in births in England to foreign born women since 1998, comparing these with the birth trend to UK-born mothers. The table in Annex A shows the number of births in England over the decade to 2020-21 projected by the ONS in its 2010 Population Projection. The main points to note over this period are these:

Trends in Births in London

6 A fifth of all births in England are in London which is the English region where maternity services have been most heavily impacted by migration. Over 40 per cent of net migration is into London. Over the past five years the birth rate in London has increased by 10 per cent compared to the overall rate for England of 8 per cent, and the ONS projects that births in London might increase by a further 10,000 a year over the next ten years. .

7 The special demographic profile of mothers in London imposes disproportionately large impacts on maternity services. A majority of births in London are now to mothers who have been born overseas. Complications in pregnancy are more frequent for this group of women, as is a higher fertility rate. Both these factors impose significant additional demands on maternity services. Difficulties of communication are a further factor.

8 The table in Annex B shows the increase – between 1998 and 2010 – of the share of births in London Boroughs to migrant mothers. It should be noted that:

9 In 2008 the Healthcare Commission published its report[2] reviewing maternity services in England, noting that the average cost of hospital care for each delivery was £2,088. This only included hospital costs, excluding ante-natal and some post-natal care after leaving hospital. Updating the figure using the official GDP deflator[3] to measure the increase in costs gives a figure for 2010/11 of approximately £2,250 for each birth. In 2010 the cost of all births to the NHS in England was therefore around £1.5 billion –under 2 per cent of the overall NHS

budget. Out of this, births to mothers born outside the UK had a cost to the NHS of over £400mn.

10 Over the past decade (2001 – 2010) number of midwives in England has not kept up with the increase in births. Table 3 below shows that between 2001 and 2010 the numbers of births in England increased steadily every year, growing overall by 22 per cent, significantly less than the growth in midwife numbers, which increased by some 15 per cent.

Table 3: Numbers of Midwives in England, the Optimal Number Needed and the Resulting Shortage: 2000 – 2010

Shortages of Midwives and Pressures on Maternity Services

11 There is general agreement that there has been a long-standing shortage of midwives in England. Medical Colleges involved with maternity care, together with the Royal College of Midwives (RCM)[4], recommended that the equivalent of between 36 and 40 midwives for each 1000 deliveries is the optimal staffing level needed to deliver one-to-one midwifery care, depending on the complexity of the cases being cared for. This implies that there has been a consistent shortage of midwives in England of around a quarter of staff numbers in the first eleven years of this century, with the RCM[5] calculating the shortage in England as being around 5,000 in 2009. The Healthcare Commission has found that almost a quarter of mothers were left alone during labour, a significant and revealing indicator of the magnitude of the shortage and reflecting the RCM’s calculation. Figure 2 shows the relationship in England between the growth in births to mothers born outside the UK and the shortage of midwives (as defined in para 16):

Figure 2: Trend of Births and Shortage of Midwives in England 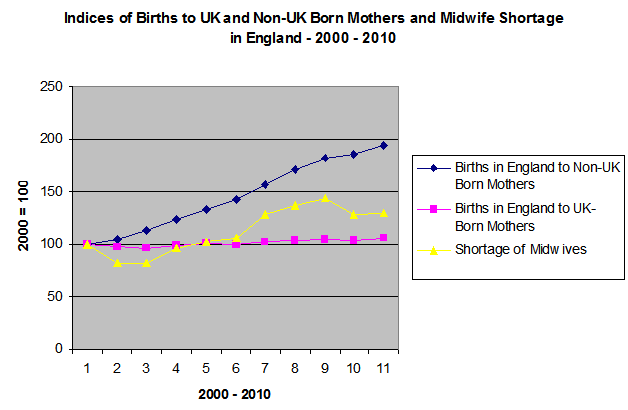 12 The chart shows that the shortage of midwives increased every year from 2002 to 2008. The biggest factor causing this shortage was the increase in births to non-UK born mothers, which accounted for over 65,000 births, growing by over 60 per cent. Births to mothers born in the UK over the same period increased by almost 42,000 – a growth rate of some 9 per cent. Out of the total increase in births in England in this period, over 60 per cent were to mothers born outside the UK. Pressures in London may be particularly intense because of the special challenges of maternities there and the high cost of housing. The Local supervising Authority for midwives in London in 2010 reported that there was a vacancy rate of 16 per cent for midwives in London and that the average age of midwives there – 42 – meant that many were coming up to retirement[6].

13 The shortage of midwives is only one of the factors generally agreed to be behind the pressures on maternity services which have been experienced in many areas of England over the past decade. The Prime Minister, David Cameron, before the 2010 Election described midwifery as being an “overworked and demoralised” profession. The Healthcare Commission has reported midwives as feeling

“more pressure and frustration” than other medical staff and there is greater distress and unhappiness expressed among a greater proportion of midwives than medical staff.

14 Pressures on maternity services will inevitably risk an adverse

impact on the quality of maternity care. It is widely accepted that all women should have one-to-one midwife care during labour, but this is frequently not available.

15 A joint survey by The RCM and ‘NetMums’ found that, among over 3500 mothers surveyed, 43 per cent had reported that, after giving birth and on a postnatal ward, they did not have access to a midwife.

Percentage of Births in London Boroughs to Mothers Born OutsideUK