Who is being allocated social housing in London?

1. London has long waiting lists for social housing which have grown by 60% in the past eight years.

2. Priority for social housing is given to those declared technically “homeless” or those living in overcrowded conditions.

3. The impact of immigration is downplayed or denied.

5. The official data is patchy. Some boroughs have a large number of lets that went unreported in the data, in some cases more than half.

6. Other boroughs reported the lets but with a large proportion of tenants, in some cases more than a third, refusing to respond on nationality (which is optional). By contrast, in the rest the England only 1.5% of respondents are recorded as having refused to disclose their nationality.

7. As a result on this very poor coverage, only a limited proportion of social housing can be confirmed as going to British nationals, in some boroughs as low as 37%.

8. Most local authorities refused to answer Freedom of Information requests on who is getting social housing or claimed to be unable to do so.

9. Migration Watch recommends that it be made compulsory for the tenant’s nationality to be recorded and published for all social housing lets. We also call for a debate over who should be entitled to social housing in the UK.

10. This paper examines the official statistics on social housing lets and nationality for the financial year 2010/11 so as to analyse the extent to which foreign nationals are being allocated social housing in London. It also reports the results of Migration Watch’s Freedom of Information requests to the Housing Departments of a number of London Boroughs.

11. To examine the impact of immigration it is necessary to look at who is being allocated social housing properties when they become available i.e. new lets. The IPPR and EHRC have previously tried to downplay the impact of immigration on social housing lets by reporting that less than 2% of all social housing residents are people who have moved to Britain in the last five years[1] . They achieved this very low figure by confining their study to those who had recently arrived and then making a comparison with the total of all existing lets throughout the country.

12. London is a hugely diverse city with around one third of its residents born overseas. Many have become naturalised as British citizens. This paper looks solely at the current nationality of those being allocated social housing. If they are foreign nationals they will either be more recent immigrants or they will have decided not to apply for British nationality.

Who is prioritised for social housing

14. The waiting list for social housing in London increased by 60% between 2002 and 2010 to 362,300. As the demand for social housing is much greater than supply, local authorities prioritise applicants. Councils and Housing Associations may operate their own prioritisation criteria or they may set a Common Allocations Policy.

15. Many councils sort their applicants into priority bands (e.g. 1 is high priority and 4 is low priority) while others score the applicants according to certain criteria. Legally, priority has to be given to those who have “reasonable preference”. These are applicants who are technically “homeless” or in overcrowded conditions. Homelessness “does not just refer to those without a roof, you may be legally classed as homeless if you are sleeping on a friend's sofa, staying in a hostel, suffering from overcrowding, or other bad conditions”.[2] A common cause of overcrowding relates to family size. Criteria relating to the required number of bedrooms depend on the number, age and sex of the children[3].

16. In 2009 the last government set out guidance on social housing allocations which made much of the fact that, alongside giving priority to those with “reasonable preference”, local authorities were to be given the flexibility to adjust their allocations policy towards those with a local connection or who had been on waiting lists a long time.[4]

17. Most London local authorities include the concept of “local connection” in their allocation policies. This is used to decide who gets priority if all other attributes are equal and, in some cases, to decide who can join the housing register. However, this "local connection" criterion is often very weak. It can be met by just being resident in the borough at the time of the application or for a period of a few months prior to the application. As long as the “local connection” criterion is met no further distinction is then made between someone who has lived in the area for a long time and someone who has recently moved to the area. The following examples illustrate the variation around “local connection” in the London Boroughs:

18. Westminster, which prioritises applicants through a point scoring system, awards points to those who have been resident in the borough for over ten years (although much fewer points than those given to applicants who are overcrowded or homeless). However, it does reserve some properties solely for those with an “established local connection” with the borough[6] .

19. More generally, consideration is given to applicants who have been on the waiting list for a long time but only in comparison to other applicants deemed to be in the same priority category. Applicants considered a higher priority (overcrowded or homeless) usually take preference.

20. In London as a whole single people, couples or families who are not classified as homeless or overcrowded are usually given the lowest priority and have little hope of ever being housed. Councils may also disqualify certain residents from even joining the housing register, for example if they earn above a salary threshold (e.g. £30,000 per annum for Lewisham).

21. Main applicants can go on the local authority social housing register if they:

Grants of ELR are often given to applicants who do not meet the criteria to remain in the UK under the immigration rules but a decision to grant leave has been based on Articles of the European Convention of Human Rights (e.g. article 8: the right to family life). The situation with Housing Associations own vacancies appears more complex with one prominent housing advice website suggesting that applicants cannot be refused a place on the waiting list solely because of their immigration status.[7]

22. The Continuous Recording of Sales and Letting (CORE) is a national information source funded jointly by the Tenant Services Authority and the Department for Communities and Local Government (DCLG). It records information on the characteristics of new social housing tenants in both Housing Association and local authority homes as well as existing social housing tenants transferring to a new property[8]. In 2010/11 it covered 60% of all local authority lets and nearly all housing associations[9].

23. Lettings data is divided into “General Needs” and “Supported Housing”. The bulk of social housing is covered under “General Needs”; this is the category referred to in this paper. The data does not include the housing of asylum seekers while they are awaiting decisions on their applications.

24. Data on letting is gathered by an interview with each new tenant after the home is allocated. The interview is designed to record a number of characteristics about the new tenants - one of which is nationality. The questionnaire is completed by the housing provider. The local authority will interview tenants going into local authority homes while housing associations will interview those allocated a home with a housing association. The question on nationality is optional. See Annex A – CORE Lettings log for a scanned copy of the questionnaire.

26. For the rest of England, in 2010, 88% of social housing lets were recorded as going to British nationals, 5.5% to foreign nationals, 5% were unknown and 1.5% were marked as having refused to answer.

28. The local authority lets include lets in council owned or managed stock and nominations to housing associations. The CORE data should include this plus any additional lets made from the housing associations’ own waiting lists. Therefore, if there was full coverage in CORE, the total should exceed the number of local authority lets. This is the case for Merton, Islington and Lewisham. However, responses to FOI requests revealed that other boroughs have a huge number of lets not being recorded in CORE. Less than half of social housing lets in Lambeth and only 40% in Newham are covered in CORE.

30. A higher proportion of social housing lets go to British nationals in outer London – 82% compared to 73% in inner London.

31. Inner London had a much higher rate of refusal to answer the question on nationality with 1,864 (13%) of compared to 434 lets (3.6%) in outer London. The refusal rate for the rest of England is 1.5%. The same questionnaire is used across the country.

32. Much greater variation appears when the data is examined at borough level (see Annex B) where there are large differences both in the numbers recorded as going to foreign nationals and in those who refused to answer. 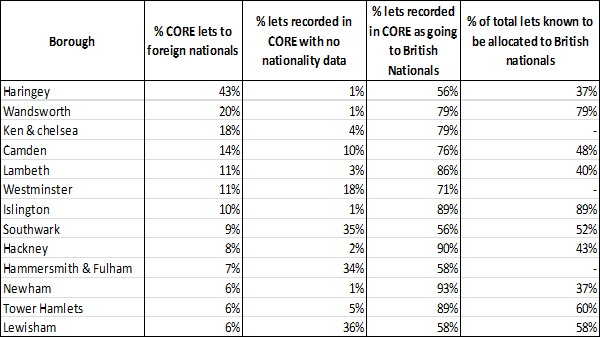 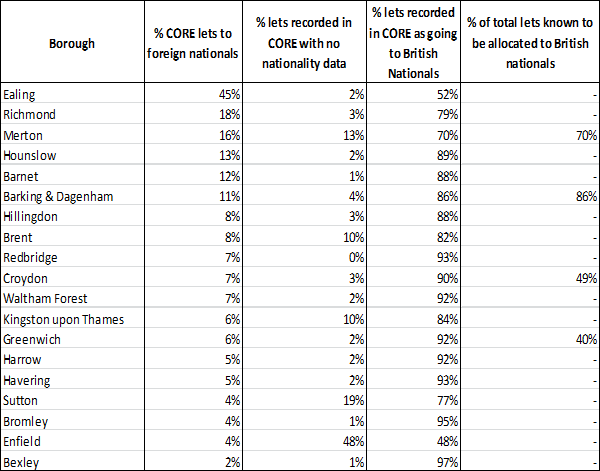 34 Nearly half of all social housing lets in Ealing and Haringey in 2010 that were recorded in CORE went to foreign nationals.

35. There is great variation between the boroughs in the proportions of tenants recorded as either refusing to answer the question regarding their nationality or of the data being unknown.

37. It is noteworthy that those inner London boroughs that showed a relatively low proportion of lets to foreigners also had a very high proportion of tenants who refused to give their nationality (Lewisham, Hammersmith, Southwark).

39. As a result of these two factors, it is very hard to estimate the true proportion of new lets to foreign nationals. Put another way, the percentage of lets for which we can be reasonably sure that the tenants were British citizens can be as low as 37% (Haringey, Newham).

43. This is not to suggest that the actual percentage of social housing going to British nationals is this percentage - just that this is the percentage that can be confirmed.

44. In addition to the CORE data there are additional potential sources of information on the nationality of new tenants. Each applicant for social housing has an application file opened on them by the housing provider. It will include interview notes about the applicant’s circumstances and identification documentation (e.g. copy of passport) to confirm their eligibility. In addition most applicants will have filled out an application form that for many councils includes a specific question relating to nationality.

45. In boroughs where there were large gaps in the data Migration Watch UK submitted Freedom of Information Requests to try and discover the actual number of social housing lets going to foreign nationals and the number going to British nationals for the financial year 2010/11.

46. No borough was able to completely answer this question. The reasons given included:

47. These were interesting responses in themselves. It is curious that councils do not deem it important to collate and so report on the nationality of those allocated housing, surely a topic of acute interest to their ratepayers. It is curious also that some councils declined to reply claiming that the question in the application form on nationality is optional but an examination of the application form shows that there is nothing in the nationality question that suggests to applicants that it is optional (see for example Kensington and Chelsea’s application form[13]).

48. The official data shows that at least 11% of social housing tenancies were given to foreign nationals in 2010. Some boroughs have large unexplained gaps in their data due either to an usually high number of respondents refusing to divulge their nationality or due to a failure to record a large proportion of their lets in CORE.

49. A full enquiry should therefore be set in hand by the central government so as to gain a full picture of to the extent to which foreign nationals impact on social housing. Meanwhile, it should be made compulsory to record and report the nationality of all social housing lets. 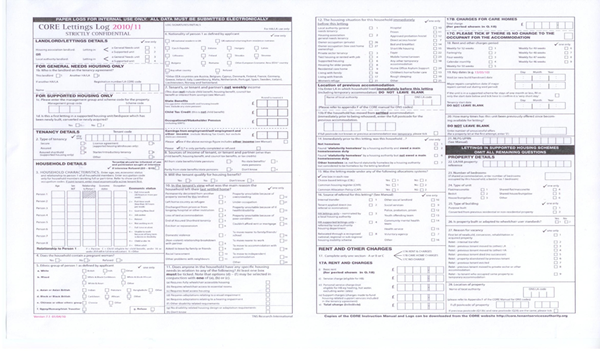 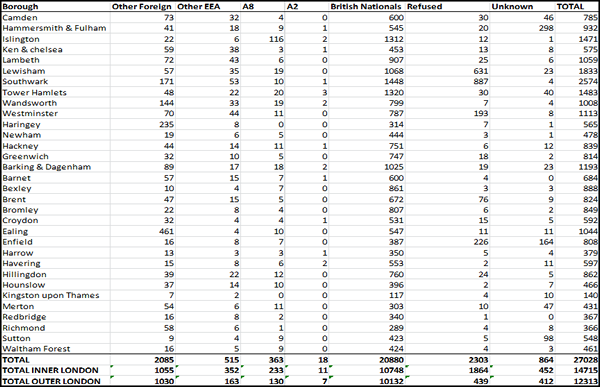