The impact of asylum on social housing

Summary
1. The unprecedented number of asylum-seekers granted permission to stay in the UK in recent years has exceeded the number of new social houses built in the period by nearly 40,000 and has had a major impact on the availability of social housing for the native population. This is not to imply that those in genuine fear of persecution should not be given refuge; it is to suggest that the government should have taken account of the very large numbers involved in making provision for new social housing.

3. The early years of this century saw a rapid rise in the number of people seeking asylum in the United Kingdom and a corresponding increase in the number being granted asylum or exceptional leave to remain in the UK. This coincided with a very low rate of building new social housing. The following bar chart shows the grants of asylum and ELR against the completion of new social and local authority housing since 1997[2] 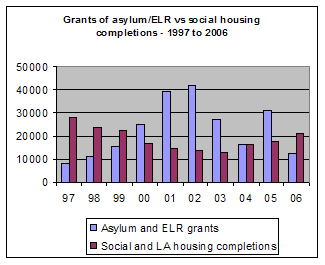 4. The figures for asylum and ELR for 2006 include the family indefinite leave to remain exercise. This was announced by the Home Secretary in October 2003. It allows certain asylum-seeker families who have been in the UK for four or more years to stay without further consideration of their cases. As at the end of 2006, about 24,000 principal applicants had been granted indefinite leave. We have included 20,000 of these principal applicants in the 2005 figures and the remainder in 2006.In practice, some of those granted included in the 2005 figure would have been granted leave in 2004. This group of people are likely to have placed a particular strain on social housing as they all have families with them in the UK.

6. We conclude that the government have, in granting asylum or ELR on such a scale, placed a very considerable strain on social housing over the last decade which they have failed to redress in their construction of social housing.