Neither Labour nor Conservatives will stop the population hitting 70m

- To stop the UK's population hitting 70 million, net migration – the number who settle here minus those who leave – would need to be reduced by 75% from the present level of 237,000 a year.
- To hold our population at 65million we need to bring net migration down close to zero.
- On the basis of the parties' current policies, Labour would cut net immigration by about 8%, the Conservatives by 27%. 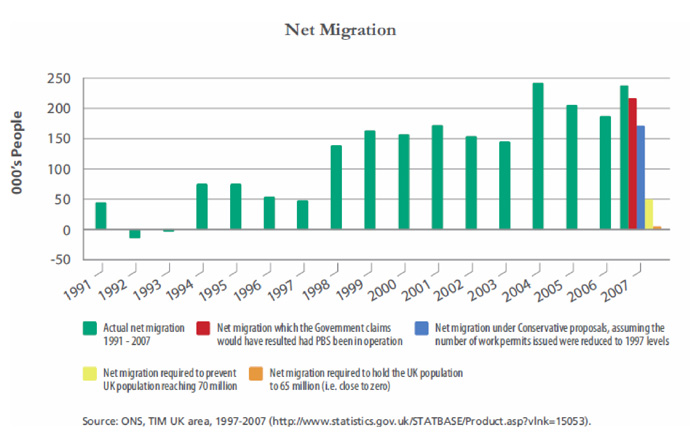 1. The UK population is officially forecast to increase from the present 61 million to 70 million in 2028. 70 per cent of that increase - nearly seven million people – will be due to immigration.

2. To stay below 70 million, net migration – all those who come here, minus those who leave – must be reduced from 237,000 (2007) to 50,000 a year and held there. The reduction required is shown in the bar chart above. To hold the population of the UK at 65 million (compared to the present 61 million) we need to bring net migration close to zero.

3. The main plank of Conservative Party policy is to introduce an annual cap on the number of people given work permits. Yet this, in itself, will be completely inadequate to stop the population hitting 70 million, as explained below.

4. In 2007 the number of work permits issued was 130,000. This included extensions, changes in employment and permits granted to those already in the UK [1].

11. The main plank of the Government's policy is a Points Based System for work permits which they describe as "tough" and "Australian style". It is neither. The Australians start with a limit and issue permits within it. There are no limits to the government's scheme. Indeed the Government's own calculation is that it will only reduce immigration by about 8%, a fall from 237,000 (2007) to 217,000 [5].

a. the Government has set up "juxtaposed" immigration controls in France and Belgium. These are causing a build up of migrants living rough in Calais and elsewhere but it is far from certain that they are being prevented from crossing the Channel illegally

b. an electronic system to record the arrival and departure of passengers to and from the UK is being introduced. However, it will not be possible to match arrivals and departures until 2012.

c. The Government has now proposed a further points system to limit the number of work permit holders who are allowed to settle permanently in Britain. This is a potentially valuable reform but the details are not yet clear.

13. A recession will have only a temporary effect as demonstrated in Migrationwatch Briefing Paper of October 2008 and confirmed by Policy Network paper "On the move? Labour migration in times of recession" issued on 7 July 2009. 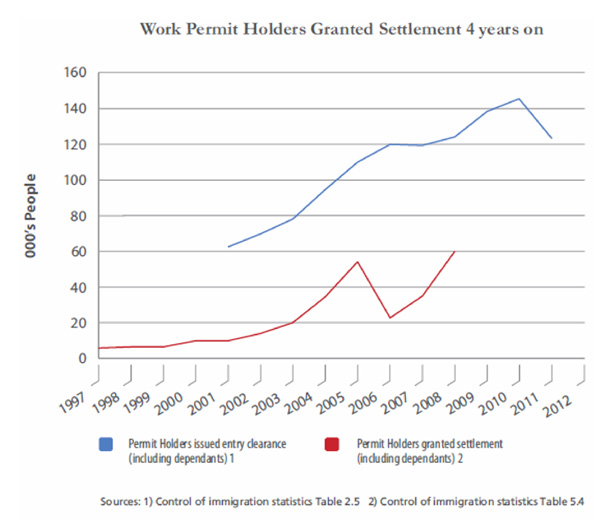 The dip in applications for settlement is because the period of qualification was extended in April 2006 from 4 years to 5. The top line (blue) has been advanced four years to illustrate roughly how many of the cohort decided to seek settlement.